After 7 years in the works, my book is out, from Cambridge University Press, May 2017. See machinehearing.org for where to buy, discounts, reviews, errata, discussion, etc.

New: "Kindle Companion" free PDF – all the figures and boxes in one high-res file (55.5 MB), including color images. 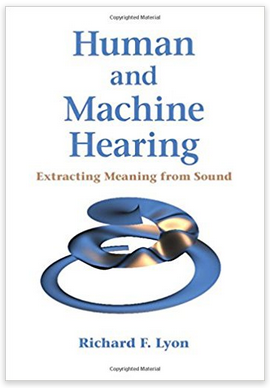 PhotoTech lecture list with links to Google videos and slides

I don't have copies of all my 70 issued US patents on-line, but can provide them on request. Here's a PDF file of all their front pages.

The only things so far here are some of my tech papers from recent years, and a few older ones. Co-authors and other details are noted in the PDFs. If you need more citation details, ask me, or for most cases look it up at IEEE Xplore or CiteSeer.IST

Abstract: A cascade of two-pole–two-zero filter stages is a good model of the auditory periphery in two distinct ways. First, in the form of the pole–zero filter cascade, it acts as an auditory filter model that provides an excellent fit to data on human detection of tones in masking noise, with fewer fitting parameters than previously reported filter models such as the roex and gammachirp models. Second, when extended to the form of the cascade of asymmetric resonators with fast-acting compression, it serves as an efficient front-end filterbank for machine-hearing applications, including dynamic nonlinear effects such as fast wide-dynamic-range compression. In their underlying linear approximations, these filters are described by their poles and zeros, that is, by rational transfer functions, which makes them simple to implement in analog or digital domains. Other advantages in these models derive from the close connection of the filter-cascade architecture to wave propagation in the cochlea. These models also reflect the automatic-gain-control function of the auditory system and can maintain approximately constant impulse-response zero-crossing times as the level-dependent parameters change. Copyright (2011) Acoustical Society of America. This article may be downloaded for personal use only. Any other use requires prior permission of the author and the Acoustical Society of America. The article appeared in J. Acoust. Soc. Am. vol. 130 and may be found via http://asadl.org/jasa/resource/1/jasman/v130/i6/p3893_s1.

* Pixels and Me, video of my talk at the Computer History Museum

* Color Imaging Conference 2004 — Eyeing the Camera: Into the Next Century

* Draft paper — Depth of Field Outside the Box

* History and Future of Auditory Filter Models with Katsiamis and Drakakis, IEEE Intl. Symposium on Circuits and Systems, ISCAS 2010

* Video of my October 2007 talk at the Berkeley Ear Club, "Cochlear Modeling Retrospective"

* Introducing the Differentiated All-Pole and One-Zero Gammatone Filter Responses and their Analog VLSI Log-domain Implementation with Drakakis and Katsiamis, 2006 Midwest Circuits and Systems

* Neuromorphic Systems Engineering 1998 — Filter Cascades as Models of the Cochlea

* ICASSP 1987 — Experiments in Isolated Digit Recognition with a Cochlear Model

* Dating the Otis King: An Alternative Theory Developed Through Use of the Internet
(my only article in the Journal of the Oughtred Society, 1998)

some older speech and hearing and VLSI papers

* ICASSP82 —  A Computational Model of Filtering, Detection, and Compression in the Cochlea

* ICASSP83 —  A Computational Model of Binaural Localization and Separation

* Signals, Systems and Computers 1990 — Correlograms and the Separation of Sounds